React Vs React Native – The key Advantages and differences Between Them 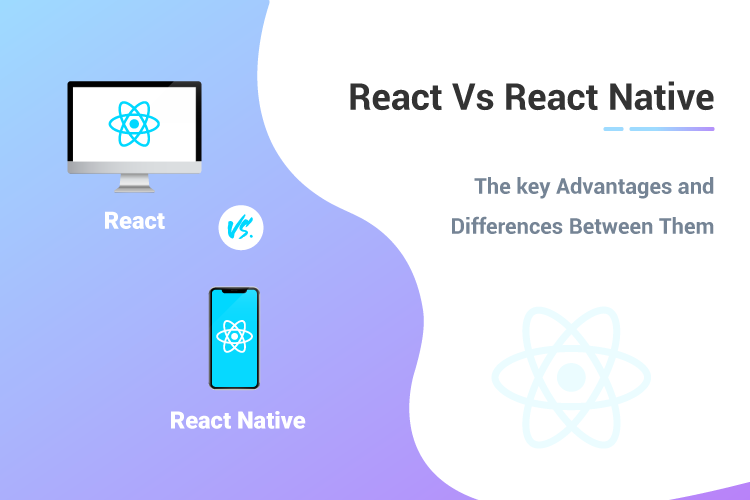 React (ReactJS) and React Native are amazing open-source platforms. Both have gained popularity and recognition in the web and mobile app development space to create robust and scalable applications. Surprisingly, both are developed by Facebook to design dynamic and high performing UI. React’s ease of use has helped many react-native app developers adopt the technology based on a familiar JS framework.

If you are about to create an app for your business, no matter what the niche of your business is, it’s important to choose a technology that can help you gain better revenue. Many businesspersons are in a dilemma about which front end technology to go with, React (ReactJS) or React Native? Though React Native uses the same foundational principles as React, the two front end technologies are set against each other, which gives way to a fair comparison of the two.

This article will shed some light on the major difference between React and React Native and key advantages of the two technologies individually.

React (ReactJS) is a JavaScript library that allows developers to build an engaging, scalable, and high-performing UI Layer. React Native, on the other hand, is a framework for designing cross-platform mobile applications, be it iOS or Android.

React uses JSX for rendering UI. In React, components can be created as per the need. It means, you can render only some of them, depending on the state of your application rather than render the whole page. It supports both client-side and server-side rendering. React Native, however, lets you write JavaScript that gets asynchronously rendered into native mobile app UI. It uses native APIs to render components in mobile.

When to use it?

In React, you can make animations using CSS. React animation is a helpful package of wrapper components along with pre-built animations that you can apply to projects easily, just like web development. However, in React Native, you have to use an animated API for inducing animation across different components of the application. React Native exposes an API called “Animated”. It consists of a lot of wonderful things like animatable values, spring/timing animations, and events.

ReactJS can be described as a base derivative of React DOM for the web platform. React Native, on the other hand,  is itself a base derivative, which means that the syntax and workflow remain the same, but components change.

Using React (ReactJS) is easy if you have some basic knowledge of JavaScript. An expert JavaScript developer can efficiently learn all ins and outs of the library in the timespan of 1to 2 days.

React enables developers to use individual parts of their apps on both client-side and the server-side that boost the development process’s speed. To put it plainly, different developers can write different parts, and all changes made won’t affect the logic of the app.

Another key advantage of React is its ability to deal with a search engine to read JavaScript-heavy apps. React can easily run on the server, rendering and returning the virtual DOM to the browser as a regular webpage and help your web app appear on the top of the SERPs.

Learning new technologies and deploying them in the new project can be difficult, but when there is a proper toolset for instructions and execution, the job becomes easy. Isn’t it?. React has a developer toolset, and it helps it stand out from the crowd amongst other front-end technologies. Developers can use the toolset to debug the code, observe reactive component hierarchies and discover child and parent components easily to inspect their states and pros.

Another amazing thing that makes React Native highly demanding is you no need to overhaul your old app. By simply adding React Native UI components into your existing app’s code without rewriting, you can complete the development process.

React Native has a component-based structure that enables developers to design apps with a more agile and web-style approach. The different tools available in react native, like react-navigation, redux helps in creating a more robust structure of your app.

Virtual dom is an actual copy of real dom. With virtual DOM, the real DOM will update only the things that have changed. It makes the application faster. Once React finds out what exactly has changed in the state, it updates those objects only, on real DOM. This significantly improves the performance and there is no wastage of memory.

React Native comes with Native Modules and components that enhance performance. As compared to other cross-platform platforms like PhoneGap  that render code through WebView, React Native defines a set of native component APIs that renders the components.

React native ensures developers have easy access to third-party plugins like JavaScript modules and native modules, so they can integrate several useful features without worrying about the implementation and code.

React Native comes with a comprehensive range of free pre-made solutions and libraries that developers can access. The libraries and solutions help simplify app designing and help developers concentrate on building bug-free codes.

Given the sheer size of the Facebook React codebase, it offers better code stability.

Don’t forget about your app development dreams in the cold war of React and Native. Both of them have their ultimate key features, advantages that are good enough to make wise decisions. If you have made your mind and have planned which technology you would like to go with, the next thing that can help you alot is choosing the best web and mobile app development company.

There are many React and React Native companies and developers in the market, but the one that has specialized experience and fame in the industry can turn the game. They can create react apps for your business and help scale heights.

If you have any doubt or want to share any advantage or difference, you’re most welcome! We love to hear from you.